Bottom Line: Yellen is sympathetic to the unemployed. To spur employment, she could cut mortgage interest rates.

Janet Yellen was confirmed as the new chair of the Federal Reserve System, or the Fed, on February 3, 2014.

As the new Fed chair, Yellen wields a tremendous amount of power. She is now the single most powerful person in the world when it comes to decisions on monetary policy that can swing mortgage rates – more powerful than any member of Congress or even the President of the United States.

How exactly? The Fed chair leads the Federal Open Market Committee, or FOMC, the group that determines how much to pour into the Quantitative Easing (QE) program that has kept mortgage rates artificially low for the past 16 months. As the FOMC head, Yellen has power to implement policies that are mortgage-rate beneficial.

The Fed started purchasing $40 billion per month in mortgage backed securities the current Quantitative Easing program, or QE3, started in September 2012. They cranked up that number to $85 billion in December 2012. This action drove rates down to record lows in 2012 and 2013.

But things could change with Janet Yellen’s confirmation. If we see a faltering economy or rising unemployment, she is likely to keep money flowing into the QE3 program longer than anyone expected.

The economy has already showed some signs of weakness in 2014. As of the date of this writing, the stock market is down over 7% since January 1.

If upcoming unemployment numbers are dismal, Yellen might act to stave off rising numbers of unemployed workers by keeping interest rates low. After all, lower borrowing rates spurs the economy and job creation in a myriad of ways.

Second, people are able to refinance, lowering their monthly costs. The average homeowner who used a HARP refinance in 2012 saved $250 per month. That money then gets dumped back into the economy with increased spending on everything from cars to TVs to cell phones.

Lower mortgage rates have been key in lowering the unemployment rate from a high of 10.0% in 2009 to today’s 6.7%. And continued rate reducing efforts could have a profound effect on whether people are able to find jobs are not.

There are a couple reasons Yellen could keep mortgage rates low. First, she’s sympathetic to the plight of the unemployed.

In a recent Time article, Yellen stated, “My father was a family doctor, and both he and my mother lived through the Depression.” Yellen recalls Brooklyn dock workers paying a meager fee to be treated, or not being able to pay at all. “I came to understand the effect that unemployment could have on people in human terms.” 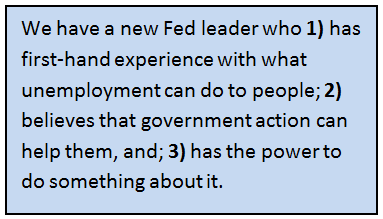 Now that Yellen is in a position to help masses of out-of-work people, it wouldn’t be surprising if she maintained and even created policies to help people who are going through the same struggles as those she encountered in 1950s New York. One of the most effective tools to fight unemployment is lower interest rates.

Also, Yellen is a self-proclaimed follower of renowned economist John Maynard Keynes, who first argued that government actions and monetary policy can make a real difference in peoples’ lives by spurring economic stimulus where the private sector can’t.

So it appears we have a new Fed leader who 1) has first-hand experience with what unemployment can do to people; 2) believes that government action can help them, and; 3) has the power to do something about it.

The only piece of the puzzle that’s missing is a long string of lackluster economic data and rising unemployment before we see a serious drop in rates. We’ve seen some disappointing employment numbers and sluggish growth, but nothing that will stop the Quantitative Easing taper – yet.

Now don’t misunderstand. No one is hoping for a double-dip recession, where unemployment spikes to 10% like it was in 2009, and people losing their homes en masse. But a slower and lower recovery rate could mean better mortgage rates across the country.

Mortgage Rates Could Fall due to Lowered Expectations

If there’s one thing that spurs a faltering economy, it’s low interest rates. And that’s exactly what Yellen could make happen, simply by reducing QE3 more slowly than expected.

Anything less than a $10-billion-per-month reduction would be enough to cause mortgage rates to fall enough to cause serious savings in a purchase or refinance transaction.

When looking at markets, such as mortgage backed securities markets that drive interest rates, it’s not about current conditions, but expected future conditions. And right now investors are expecting a $10 billion per month reduction in QE3 until the program ends.

But if a hint of a different position is released in statements from Yellen or the Fed, be ready to lock your loan. We’ll see dramatically falling rates that may only be around for a day or two at the most. After that, investors will realize that the QE3 taper will still happen, and rates will shoot up again in anticipation of it.

Here are some upcoming dates to watch for mortgage rate swings:

Check today’s rates and see if it’s a good day to lock.

Be Ready to Lock

If rates swing lower, be ready to lock. Get pre-approved for your home purchase or refinance here so you’ll have everything in place. Rate improvements often only last for a few days or a few hours so there’s often not enough time to capitalize on them if you’re just starting the application process.

Contact a reputable loan professional and get your application started.

Tim Lucas is a licensed loan officer with over 12 years of experience as a loan originator, processor, and team manager. Get a live rate quote for your home purchase or refinance at MyMortgageInsider. Visit Tim on Google+ and Twitter.