The days of seeing mortgage interest rates in the 3 and 4 percent range could be ending. But some experts have differing opinions on how high the rates will go, if at all this year.

“If they raise the interest rates too high, they will be nailing the coffin on the housing market,” says Marianne Collins, executive director and COO of the Ohio Mortgage Bankers Association in Westerville, Ohio.  “All indications say the rates will go up. That really hasn’t happened yet because so many things influence it.”

She says that the federal government is curtailing their bond purchases. 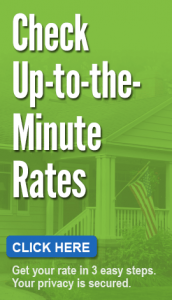 “Their goal is to drive interest rates up to bring capital investment back into the market. But the rates have to be high enough for that. Investors were burnt so badly with the financial crisis,” she says. “The problem is that the economic data is not all that great.”

For instance, she says the consensus of experts say that the unemployment rate is still at 10 percent although it appears to be under 7 percent, Collins says.

“Many people have exhausted their benefits or underemployed at minimum wage. They aren’t being counted in the statistics anymore. The numbers are only based on claims,” she says.

“With a sluggish economy, how can you make interest rates go up? The housing market has already slowed. The weather might have something to do with that. But the economy has a lot to do with it,” Collins says. “It’s scary.

Other reasons that she believes will keep interest rates down this year is that a lot of foreclosed borrowers will challenge their lenders if their loan is a Qualified Mortgage, and the United States’ debt is too high.

“I just don’t see investors getting back into the mortgage-backed market for a very long time. All that affects interest rates. I don’t think we will see the rates go very far for a while,” she says.

She’s been in the mortgage business long enough to remember when the interest rate went up to 21 percent for a 48-hour period in the early 1980s.

“But there were buyers out there then, and we had a strong economy. People were actually taking out those loans,” she says.

The Mortgage Bankers Association experts are envisaging that rates will go past the 5 percent mark this year and then as high as 5.3 percent by the end of 2015.

Even Zillow, the online real estate database, predicts that the 30-year fixed mortgage rate will reach 5 percent by the end of the year. 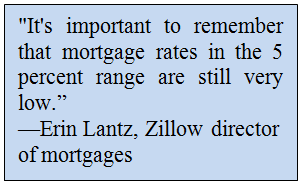 “As the economy improves and Federal Reserve policies change, mortgage interest rates will rise throughout 2014, likely hitting 5 percent for the first time since early 2010,” Erin Lantz, Zillow director of mortgages, says in a press release in December. “While this will make homes more expensive to finance – the monthly payment on a $200,000 loan will rise by roughly $160 – it’s important to remember that mortgage rates in the 5 percent range are still very low.”

Because affordability is still high in most areas relative to historical norms, rising rates won’t derail the housing recovery, Lantz adds. “Unfortunately, this isn’t true in all areas – affordability is starting to become an issue for some markets, particularly some of the booming California markets.”

If Mortgage Rates Rise, They will Still be Very Low

Chris Cope, president of the Allen Tate Mortgage in Charlotte, N.C., and president-elect of the Mortgage Bankers Association of the Carolinas, Inc., is seeing an increasing environment into the 5.5 percent range. 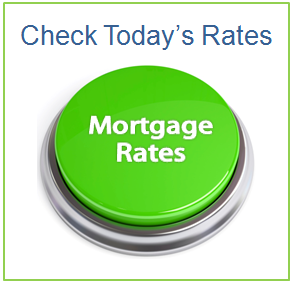 “That might still be the case. There is obviously rate volatility in the market,” he says. “It gets some buyers off the fence to finally buy a house. They see that rates probably will go up. So, they tell themselves this is the time to do this.”

“I’m still not sure what we will see when it comes to interest rates the second half of the year. It’s still too unstable. But I don’t think it will be a big upwards swing,” he says.

After spring time, it might be a clearer picture of what growth the country will see.

“We might see then what the real numbers look like after the weather has passed, and we see more people getting back to work,” he says. 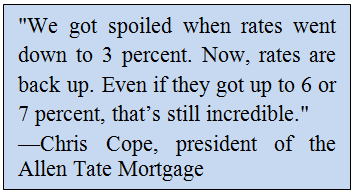 Right now, the interest rate ranges depending on whether someone is paying points and what their credit score might be. But 4.5 percent is an average interest rate for a 30 year term.

“That’s still really historically low,” he says. “To think we were at this place two years ago, and people thought that was low then. We got spoiled when rates went down to 3 percent. Now, rates are back up. Even if they got up to 6 or 7 percent, that’s still incredible. But we are coming out of a really tough time.

He says that those who are borrowing appropriately, it’s a good time to borrow with their eyes open and not making the mistakes that happened a few years ago.

“It’s still a good time to take on a little debt. It is inexpensive money. We are starting to see more home equity loans, too,” Cope says.

So homeowners have at least a couple of things to look forward to: they have equity in their homes again, and they will see historically low rates for some time to come.

Check today’s rates and lock in your mortgage.

Lee Nelson is a Chicago-based writer whose work has appeared on Realtor.org, Yahoo! Homes, TheMortgageReports.com, and more.