Effective January 10, 2014, a series of new rules will redefine mortgage lending practices – at least they are supposed to. There is much confusion about how these incoming rules, called the Qualified Mortgage (QM) and Ability to Pay rules – will influence individual borrowers.

Based on our research and analysis, although there is much hype surrounding the mandates, it all smoke and no fire. In fact, an estimated ninety five percent (95%) of consumers will not notice any significant change in their lending activity.

This post attempts to debunk some myths and separate fact from fiction.

Derived from the Dodd-Frank days, and a brainchild of the Consumer Financial Protection Bureau (CFPB), the rule is a basic attempt to prevent lenders from providing loans to individuals who do not have the capacity to repay the debt. This much-publicized, common sense mandate takes into consideration various factors to measure income against debt.

In fact, the rule is so basic, Richard Corday, head of CFPB calls the changes a “back to basics” approach for mortgage lending. Apparently, common sense is finally holding sway over legalese and financial-speak, and as far as we know consumers don’t appear to be complaining.

Impact on consumers: low or nil!

Although some analysts have expressed concern over the new rule, most borrowers are savvy enough to buy an affordable home without the oversight of government authorities. It is pure common sense: why would someone borrow an amount they cannot repay?

Gone are the days of buying homes with wild speculation that they will double in value in a year – a practice that caused buyers to care less whether they could repay the loan out of their own pockets. Now, people buy homes because they want to live in them.

And the Ability-to-Repay rule is more targeted at banks and lending institutions that follow reckless lending practices, not the consumer.

Qualified Mortgage (QM) refers to a series of guidelines a mortgage needs to meet in order to be classified as “QM”. The basic focus of these guidelines is to reduce risk and ensure the borrower can repay the loan as contracted. Key criteria that a lender needs to meet include:

Impact on consumers: low or nil!

Myth: If I don’t fall under QM, I am out of luck

Much to the contrary. As discussed, over 95% of borrowers are already QM-compliant. For the other five percent (and others who choose the non-QM option), many banks have released non-QM programs. Although the QM rule went into effect on January 10, banks have been on notice for almost a year and have had ample time to prepare.

Chances are that if your home purchase or refinance application falls outside QM standards, it will be quite simple to find a lender who can issue you a non-QM loan and keep it in their own portfolio.

Myth: The QM onus on borrowers 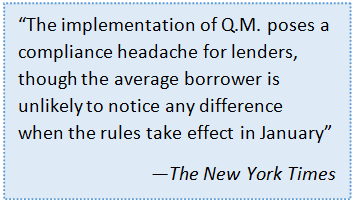 Absolutely not! Lenders will be primarily responsible for meeting these guidelines and will bear most of the regulatory burden.

In fact, the average borrower will not feel any immediate impact as a result of these rules.

It is true that compliance requirements will be more cumbersome for lenders but that is probably a good thing for the market. Now that the market is on its way to recovery, we wouldn’t a repeat of the 2008 Financial Debacle again.

Myth: QM will cause undue delays in securing loans

While it is true that lenders will be checking borrower documentation to ensure adequate ability to repay (and that would be a good thing), the checks are not expected to impact processing times significantly. With the advent of these new guidelines, lenders have proactively stepped-up internal compliance processes and systems. Barring the initial “teething period” (perhaps not more than a few weeks) and “first time hiccups”, most loans will be approved within the normal timeframe stipulated on the loan documents.

Myth: Down payment requirements will change

Despite much confusion, there won’t be a precipitous increase in down payment requirements. The QM mandates, thus far, have not touched upon the issue of down payments and most borrowers will not see an increase in the amount they need to put down.

Myth: A mortgage I already closed on will be affected

This is one of the biggest myths. The rule went into effect on January 10, and although it won’t impact nearly 95% of lending activity, it won’t affect existing mortgages.

Still confused? Our experts are waiting to assist you. Contact us here to discuss QM and non-QM options and while you are it, complete our free mortgage loan application to obtain a free quote from a qualified pool of lenders.