New appointments are a grey area: some go well while others spell “catastrophe”. Despite careful screening and due diligence, uncertainty, especially from a policy perspective, often prevails the first few months of any incumbent’s appointment to office.

Pursuant to the Housing and Economic Recovery Act of 2008, the Federal Housing Finance Agency (FHFA) was created to provide oversight to ailing agencies, such as the Fannie Mae, Freddie Mac, and nearly twelve Federal Home Loan Banks. Cumulatively, these agencies account for the nearly $5.5 trillion mortgage finance market. If you consider industries associated with the market, we are looking at nearly twenty percent (20%) of US economy.

The Federal Housing Finance Agency (FHFA), in its official news release, announced the appointment and swearing-in of Honorable Melvin L. Watt as the first Senate-confirmed permanent director of FHFA. Considering the scope of the appointment and its impact on the multi-trillion mortgage finance market, the position has been closely scrutinized by industry pundits, media, critics, and government bodies.

Although opinions about the new appointment vary from “optimistic” to “skeptical”, we consider Mr. Watt’s appointment to be a promising — and probably a landmark — decision that will shape FHFA’s future.

Check today’s mortgage rates and see if you qualify, sometimes within minutes. 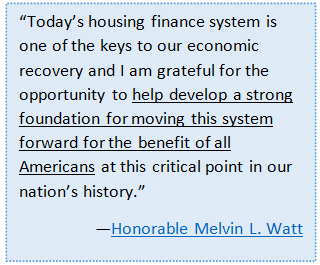 In addition to providing oversight to critical agencies, the FHFA plays a critical role in stabilizing markets. As such, the head of the agency must be an individual who can diffuse current challenges and lead FHFA toward progress.

A graduate of Yale Law School, Hon. Watt offers a dynamite 3E combination of experience, education, and excellence. For nearly two decades, he has represented the twelfth congressional district (North Carolina) and served on the Committee on Financial Services and also its Subcommittee on Capital Markets and Government-Sponsored Enterprises. Furthermore, he has done extensive work on the House Judiciary Committee.

Watt’s predecessor, Edward DeMarco, had taken several steps to reduce government dominance within financial markets. While that may be a good thing, under DeMarco’s leadership, FHFA took the stance of raising fees to guarantee loans, known as G-fees or loan level price adjustments (LLPA). The additional LLPA fees were primarily a risk mitigation strategy under his stewardship.

The strategy was effective during its inception stages but apparently started inducing inertia within the agency. But that was the whole point. After all one of FHFA’s main goals is to give more market share to the private sector.

Soon, DeMarco added another 10 basis point G-fee hike. Consumer advocates and housing groups were raising their antennae by this time and made serious efforts to retract the already onerous fee structure. The New York Times reported that DeMarco refused to reduce principal on underwater mortgages, a move that would aid economic recovery. In wake of DeMarco’s refusal, the newspaper indicated that prominent state attorneys general had formally filed a request with President Obama to fire DeMarco, who was the acting director, and appoint a new director who would take the initiative to institute White House proposal to reduce principal on troubled mortgages.

In fact, in a critical letter to DeMarco himself, Dan Berger, president and chief executive of The National Association of Federal Credit Unions argued against DeMarco’s policies and wrote: “NAFCU does not believe that these actions are appropriate because the cost of borrowing will greatly increase and lending will inevitably slow down.”

Mr. Watt signaled his strategy and direction from his swearing-in ceremony itself. In his speech, he cited deep concerns for predatory lending and junk mortgage practices and expressed much interest in learning about his staff members’ “personal stories”. Furthermore, he shared his own ordeals and explained how access to homeownership for his family was [sic] crucial piece of his journey.

“He’s a thoughtful man, he’s a smart man and he’s a good man, but that is something that is certainly along the lines of what I expect Mel to do,” –Peter Wallison, Senior Fellow, American Enterprise Institute

He was quick to delay the effective date of fee hikes proposed by his predecessor. Analysts are watching this move closely and to put it in the words of Edward Mills, FBR Capital Markets analyst: “We view this action as confirmation that incoming director Watt will place the cost and availability of credit at the center of his decision-making, which, if successful, will allow for the expansion of mortgage credit availability.”

Key initiatives that are presently on Director Watt’s desk include:

Director Watt’s supporters consider his five-year tenure to be manna for homeowners and expect his pro-ownership initiatives to make further progress. Although too early to offer definite answers, initial indicators point to Watt’s borrower-friendly approach and a distinct shift from DeMarco’s stern policies.

According to Investor.com, “Watt wants lenders to forgive principal on loans held by millions of delinquent borrowers rather than move them to foreclosure.”

What should homeowners do at this time?

Managing a large body such as the FHFA, however, is not one man’s prerogative and there are plenty of opponents who will put pressure on Watt to reconsider some of his policies. Some of his critics are already voicing their opinion: “DeMarco’s moves helped return Fannie and Freddie to profitability and helped them gradually pay back the Treasury for their bailouts. Whereas he protected taxpayers, Watt wants to protect deadbeats.”

While the new director’s policies may impact P&L numbers at financial agencies, homeowners appear to be moving forward with much optimism. Though too early to predict a precise path, they apparently have found a “messiah” who will channel hundreds of billions of dollars in the markets for the next five years (until 2019).

Watt could go either way, but one thing appears to be clear: he will do his best to protect homeowners. Why sway with uncertainty? Given that fee hikes have been postponed, but probably not indefinitely, now may be the best time to obtain a low rate quote.